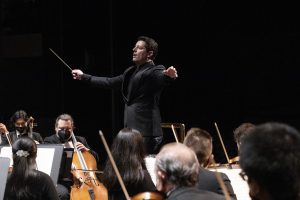 Season Subscriptions of 4 – 7 concerts AND tickets for groups of 10 or more are still available OR join us for Saturday Nights and get the best seats at the best price.

After August 15, for the best available seats, purchase subscriptions and packages  through the box office.

The season premieres with a big and bold program. The concert opens with the Overture from Ruslan and Ludmila by Mikhail Glinka, one of the great overtures in opera. The program also features Paul Hindemith’s powerful Symphonic Metamorphosis on Themes by Carl Maria von Weber, later adapted by George Balanchine for the ballet Metamorphoses. The final work is Piotr Tchaikovsky’s epic Symphony No. 4 in D minor, a very personal symphony and one to be heard live in the concert hall.

Our holiday gift to you is a program of treasured favorites and modern classics. This spectacular concert includes classic carols, music from the films A Nightmare Before Christmas and How the Grinch Stole Christmas and timeless works from The Nutcracker Suite and Babes in Toyland. We welcome back Sarasota’s Key Chorale, the Suncoast’s premiere symphonic chorus, for a traditional sing-a-long, but we’ll keep a few surprises under wraps.

The Venice Symphony will transport you to your favorite museum with music from Indiana Jones and the Raiders of the Lost Ark, The Mummy, Night at the Museum and The Da Vinci Code. Concertmaster Marcus Ratzenboeck dazzles with his violin solo on Camille Saint-Saens’ Danse Macabre. Then music and art meet in glorious fashion in Modest Mussorgsky’s ravishing Pictures at an Exhibition, orchestrated by Maurice Ravel and performed by The Venice Symphony at full strength.

Fall in love all over again with music from Casablanca, Romeo and Juliet and Gone With the Wind. Hailed as “…dazzling, electrifying and compelling,” superstar violinist Sandy Cameron will perform Danny Elfman’s Edward Scissorhands Suite, The Love Theme from Cinema Paradiso and the Tango from Scent of a Woman. Finally, you will be treated to the Symphony’s premiere of Leonard Bernstein’s sweeping Symphonic Dances from the enduring classic West Side Story.

There is no need to travel to a galaxy far, far away to hear unforgettable music by our greatest living composer, John Williams. This concert brings you the music that has inspired and delighted generations of music listeners. The program includes Williams’ iconic scores from blockbusters E.T: The Extra Terrestrial, Harry Potter and the Sorcerer’s Stone and of course Star Wars, to the lesser known but equally beautiful music from Far and Away and the Oscar-winning film Lincoln.

Irish eyes will be smiling when you join The Venice Symphony for A Celtic Celebration. Our guest artist is vocalist and harpist Orla Fallon, an original member of the phenomenally popular group Celtic Woman.  Highlights include Percy Granger’s exuberant Molly on the Shore, music from Riverdance and Symphony No. 3 in F Minor, known as the “Irish,” by Charles Villiers Stanford.  UPDATE: FRIDAY NIGHT IS ALMOST SOLD OUT.

The season finale features one of the greatest flute players of our time. Jim Walker, former principal flute of the Los Angeles Philharmonic, solos on Mozart’s Flute Concerto in G Major, John Williams’ The Face of Pan and Mancini’s Pennywhistle Jig. William Walton’s The Wise Virgins Suite, based on the cantatas of Johann Sebastian Bach, music from Tchaikovsky’s Sleeping Beauty and Mendelssohn’s A Midsummer Night’s Dream round out the concert and our spectacular season.